The Circle of Corruption:
A New Theory of How Things Actually Work
in 21st Century Britain
Under Tony Blair's (and now, Gordon Brown's)
'New Labour' Government

The following diagram reflects a hypothetical and theoretical model of how things might actually operate under the New Labour government.
In this model, labour laws are re-written and/or subverted and bullying/mobbing is rewarded in order to silence those who point out genuine failures in the system:- 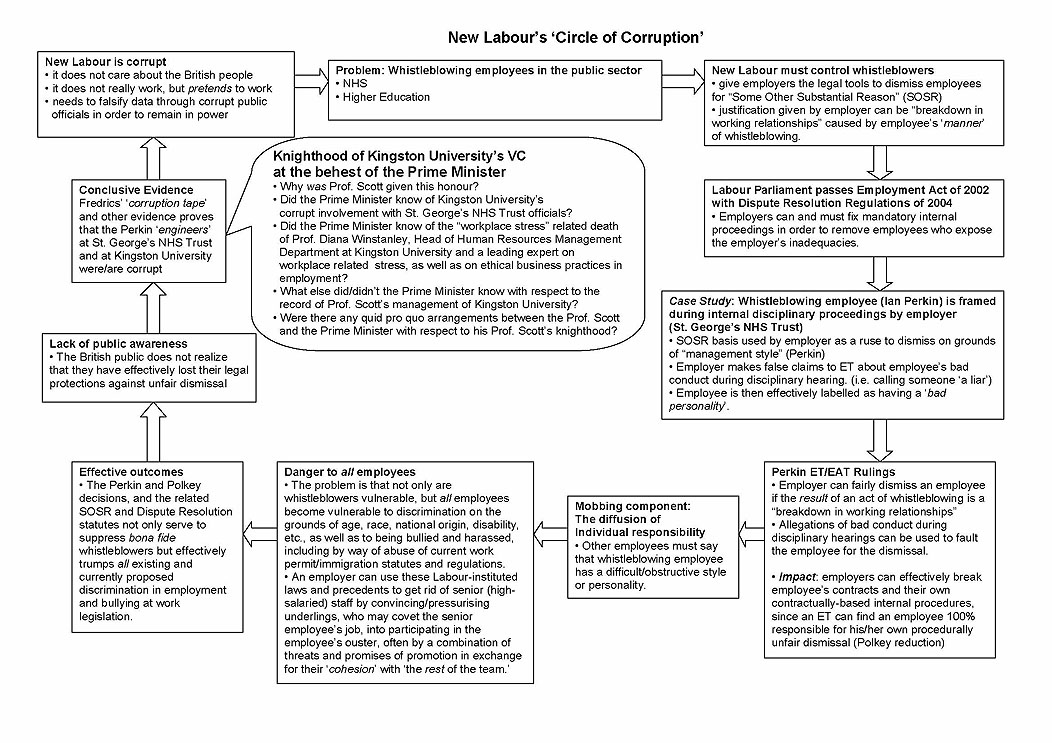 Could this model be based on a true and accurate picture of the current state of affairs for British workers?
Certainly, it raises many questions that are worthy of further thought and exploration.

For example:-
Does the present system of NHS and HE targets encourage the falsification of statistics, thereby resulting in a lack of accountability when failures occur?

What is the impact of this model on the quality of our graduates entering the commercial/public sector workplace or embarking upon a career of academic research and teaching?

What does UNESCO say about the current state of corruption in HE?

What is the impact of this model on the public health of all Britons?

How does this model affect the rights of disabled and minority workers?

How does this model affect Britain's standing in the international marketplace and in the academic community?

What is the impact of this model on the integrity and moral fibre of our citizens?

Can the British principles of basic fairness and decency continue to exist?

How does this model affect your job security?

Who are our public officials and how do they act in respect of their obligation to uphold the principles set forth in the government's Nolan Report?

Who are the St George's NHS Trust/Kingston University officials and what have they been accused of doing?

How far will New Labour go to keep itself in power?

We hope that you will engage fully with this theory, and that it will stimulate you to think about whether or not what New Labour is saying about improvements in the NHS and HE sectors reflects reality as we know it to be, as well as thinking about how New Labour's approach to employment rights impacts upon the lives of ordinary British workers.

UPDATE- May 2009
In light of the current MP Expenses Scandal, what lessons about the above proposed model can we learn?

Disclaimer: The above model is merely a hypothesis based on a single theoretical model, and is not, therefore, intended to portray actual facts about any person(s), either living or deceased. Rather, it is designed to pose questions for further thought and reflection by the reader.