Is there a problem with anti-Semitism
at Kingston University? 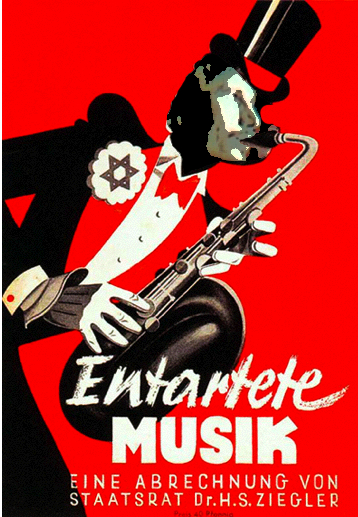 How does the former School of Music fare with regard to its religious/racial makeup?

Well, at one point, it was doing pretty well with a total of six Jewish staff members, each of whom brought considerable expertise and international professional experience to the School.

The following is a list of all Jewish staff members who have taught in the School since 2004 but who are no longer teaching there because they were either dismissed, forced out, or because they did not have their contracts renewed (in effect, dismissed):

Total remaining Jewish staff members in the former School of Music as of July 2007 = 0
Does this seem like a purge to you?

Prime Minister, David Cameron named Kingston University as one of the worst universities for its record of inviting Islamist extremist preachers to speak on campus.The Government’s Extremism Analysis Unit has concluded that there were at least 70 events held on campuses last year that involved hate preachers. Queen Mary, King’s College, SOAS and Kingston University held most events, the unit said.

Reliable witnesses have reported that they were present when Dr Carol Gartrell voiced her strong objections to the subject matter of Dr Howard Fredrics' opera, The Whitechapel Whirlwind, which explores the life and career of his cousin, the Jewish boxing champion, Jack 'Kid' Berg.
Could this have been because the opera portrays an important Jewish historical figure in a positive light?

Reliable witnesses have also reported that they were present when Dr Fredrics' colleague, Mike Searby made disparaging comments about the apparent Jewishness of Dr Fredrics' music, given that it was influenced by the music of Arnold Schoenberg, a Jewish composer whose music was banned by the Nazis during the 1930s.

"As you know, left to themselves in a world of peace, the worst Jews would ever do to people is debate them to death." -- comedian, Dennis Miller

Is it acceptible for Jewish staff members at Kingston University to act in accordance with the principles of their faith and cultural background?

Is it acceptible at Kingston University for Jewish staff members to openly express how their faith and culture affects the way they approach their work, without fear of being accused of disparaging their colleagues?

Let's see what Kingston University's Vice-Chancellor, Sir Peter Scott has to say about all of this:-

it was unprofessional) by reference to your citizenship and religion.

The terms in which you seek to justify / explain your unprofessional

behaviour amount to further disparagement of your colleagues, i.e. the

care less deeply than you (as a Jew). Equally I must rebut in the

strongest possible terms any implied suggestion in your letter that you

have been discriminated against on grounds of your nationality or

religion; there is not a shred of evidence in the many papers I have

read to justify such a suggestion."

So what was it that could have elicited such a strong response from Sir Peter Scott?
Here is what Dr Fredrics actually wrote:-
"I know that my working life and relations at the School could have been easier/better had I not raised my concerns. Nevertheless they were genuine, legitimate and serious concerns and I needed to raise them.   Given the University's policy of encouraging free and open debate, I assumed I could do so without suffering detriment.

I understand that one issue of concern may have been that it was difficult for senior staff to fully address the issues I raised (all of which I believed to be legitimate and relevant) given constraints on the time they had available for management issues.   I was , however, never told to curtail my responses to issues that arose in the School or my input into proposals regarding the way the School ran. However, in the future I will try and bear this in mind. As a cultural observation, I believe that we Americans often tend to be more direct in our criticism of colleagues at work, which is intended to be helpful professional (not personal) criticism, and some of the friction between myself and other members of the School may have some thing to do with this cultural difference. Further, as a practising Jew, I am constantly obliged to question and re-question my faith.   This may explain to some extent my questioning and re-questioning of all issues , not just ones of faith. I also believe that working relations in the   School would have been better if issues were dealt with/mediation had taken place at the time rather than leaving unresolved issues to fester."

Did Dr Fredrics really disparage his colleagues? Where does he say or even imply that they 'care less deeply'?
Did Dr Fredrics accuse the University of discrimination on grounds of nationality or religion?
Or did Sir Peter Scott accuse Dr Fredrics of disparaging his colleagues simply because he dared to openly expresse how his religious and cultural background affects his way of working and interacting with his colleagues?

If it is not acceptible for Dr Fredrics to, in the interest of promoting greater understanding, express his thoughts regarding the relationship between his Jewish religious and cultural background and the shaping of his approach to work, does that mean that Sir Peter Scott's remarks were, by definition, anti-Semitic in their content? Remember, Sir Peter wrote this in the context of his denial of Dr Fredrics' request to undertake mediation with his colleagues, citing Dr Fredrics' alleged 'further disparagement' of his colleagues as a reason for this denial.

Indeed the most basic Random House Dictionary definition of anti-Semitism is:-
"discrimination against or prejudice or hostility toward Jews"

Did Sir Peter Scott's comments reflect a discriminatory, prejudicial and/or hostile attitude towards or treatment of Dr Fredrics?

Reliable reports have come from a well-respected British barrister, which suggest that barrister, Zafar Ali was asked to leave his chambers following the discovery that Mr Ali had engaged in "reprehensible" anti-Semitic acts.

1. When the university chose Mr Ali as their "unbiased" and "independent" investigator, what criteria, if any, did the university use to determine whether or not Mr Ali was, in respect of the job he was about to perform, a fit and competent person for that
task?

2. How many others were considered for the job, or was Mr Ali the University's sole choice?

3. Why did the university select a barrister possessing less than pristine credentials?

4. Did the university's senior management care about fairness, or did they want a whitewash?

5. What checks did the university undertake to ensure that Mr Ali was, having regard to the known circumstances of the case, a suitable person to investigate it?

6. Was the university careless, or intentionally biased, when selecting a person with alleged anti-Semitic tendencies to investigate a Jewish member of staff?

7. Who at the University is responsible for hiring Mr Ali? Was it now former Personnel Director, Liz Lanchbery (aka Liz Scholey)?

8. How did the university ensure that Mr Ali, in the role of a strictly neutral and independent investigator, isolated any personal dislike he might have towards a section of the community from his investigation into a member of that same disliked community?

9. Was it reasonable for the university to impose such an onerous burden upon the shoulders of Mr Ali?

10. Was the investigation tainted, if not prejudiced, by the choice of Mr Ali as its sole investigator?

11. Would an alternative choice of investigator have given Dr Fredrics a fair and unbiased investigation free from the lingering doubts and concerns surrounding Mr Ali's efforts?

12. Could this entire matter have been resolved better by the University?

13. Should a fresh investigation be held by another person possessing exemplary credentials?

Why did Kingston University hire Zafar Ali?
Yes, why, INDEED?

An Anti-Semitic /Anti-American
Extremist Organization
To Investigate A Jewish-American Member of Staff?

In 2005, Kingston University spent public funds to hire Zafar Ali, then a leading advocate of the development of the Iqra Islamic School in Slough, to investigate allegations of wrongdoing by Dr Howard Fredrics, a Jewish-American member of staff at the University. Mr Ali continues to this date to act as an agent of the University, while serving as the Chair of the Board of Governors at the Iqra School.

According to wide-ranging British national press reports, the Iqra School is run by the Shakhsiyah Foundation, believed to be a front for the extremist group, Hizb ut-Tahrir, a group which is banned in many countries, including Germany, Russia and Denmark for its openly anti-Semitic views.

In December 2009, approximately two weeks after an interview with Dr Fredrics appeared in the Westminster Journal in which he revealed the connection between Mr Ali and the University, Ms Lori Fredrics was racially assaulted by an individual who referred to her by name. She and her husband were issued with death threats and the matter was reported to the Metropolitan Police, who are continuing to investigate the matter.

To learn more about this important news story, click HERE.

To view a Guardian video report containing an interview with Zafar Ali, click HERE (scroll to 2:10 to view the portion featuring Mr Ali).

To view a BBC Newsnight story on Hizb ut-Tahrir influence in British schools, check out the embedded video below:-

Could Kingston University
Be A Breeding Ground for Extremism?

According to an article published in RIver Online,  Kingston University may be about to be included in a report on UK universities that have become ripe for recruitment of radical Islamists.  While free speech is  thwarted through legal proceedings against its former staff, the University has apparently permitted radical Islamists to recruit on campus.