Who is Zafar Ali?

Zafar Ali is a barrister hired by Kingston University to serve as 'independent' investigator to look into allegations of wrongdoing against Dr Howard Fredrics, following the filing of an ultra vires collective grievance by eleven of his colleagues in June 2005.

But did the University look into the background of the man they hired to investigate one of their employees?
If so, did they choose Zafar Ali because of his reputation for competence, honesty and integrity?
Or did they choose Mr Ali because they believed he would follow their pre-ordained agenda to dismiss Dr Fredrics on trumped up charges?

Read the following documents about Mr Ali's prior record and decide for yourself whether or not you think that Zafar Ali is the kind of person who should have been entrusted with conducting a fair and impartial independent investigation. 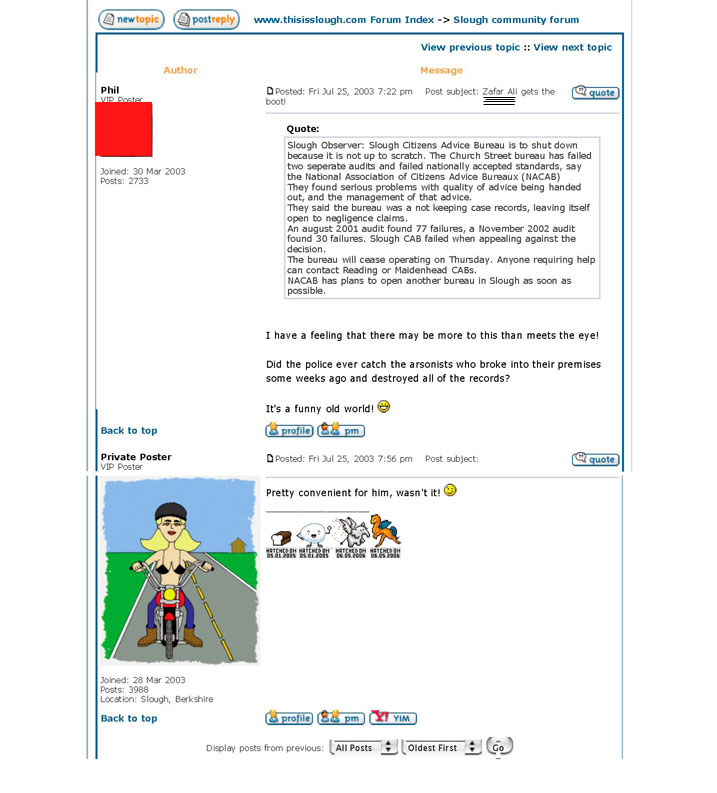 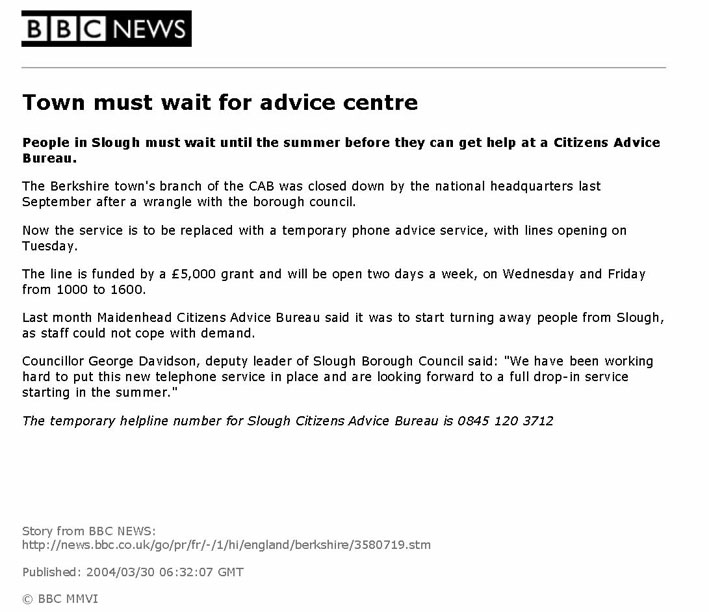 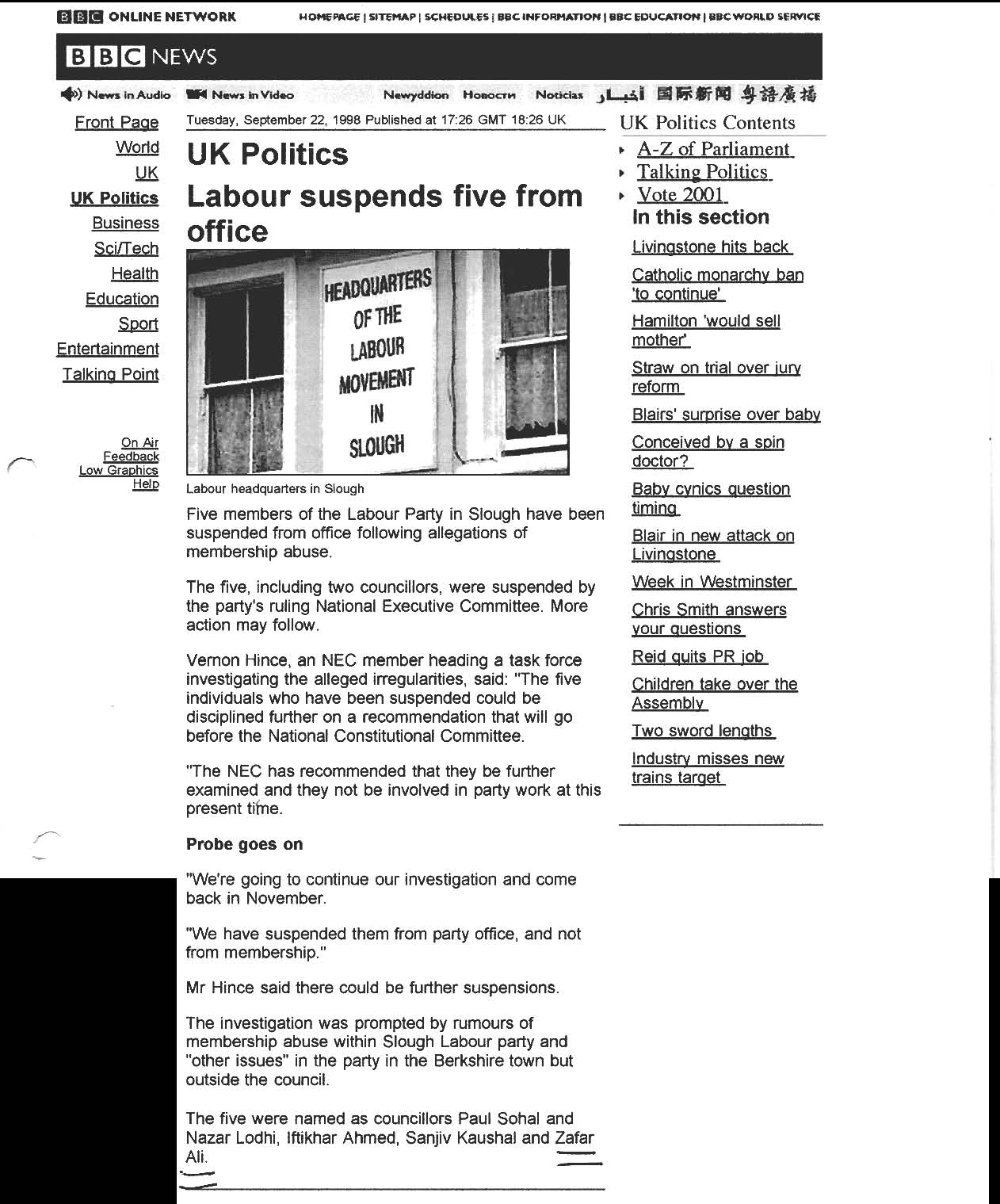 Excerpts from the letter of suspension sent on 22 September 1998 to Zafar Ali by Mr David Gardner, Assistant General Secretary of the British Labour Party:-

“Allegations that you may have been involved in a breach of Labour Party rules have been brought to the attention of national officers of the Party following a report of the NEC Task Force investigating the Slough Labour Party, These relate to the recruitment of members outside the provisions of the Party’s rules and interference in the selection ballot for European candidates in Thames Valley. To enable these allegations to be further investigated and [sic] the NEC is being asked to authorise a full report to be drawn up with recommendations for disciplinary action if appropriate.

I write to give you formal notice that it has been determined that the powers given to the NEC under 6A.1 (a) of the Party’s Rules should be invoked to suspend you from office or representation of the Party, pending the outcome of this investigation and any further action recommended by the Report.

As a result you will neither be entitled to attend Labour Party meetings as a delegate nor to represent the Party in any capacity.

The NEC has asked the Task Force to continue its investigation and you will be contacted in due course with details as to how it is intended to proceed with enquiries. It is hoped you will feel able to give your full co-operation when requested to do so.”

At the foot of the letter as a postscript Mr Gardner writes:-

“(N.B. Rule 6A.3 says “A suspended member shall not be eligible to seek any office in the Party, nor shall s/he be eligible whilst such suspension is in force for nomination to any panel of prospective candidates nor to represent the Party in any position at any level”.).”

The postscript represents a slight misquotation of the rule but not one that distorts its sense. In the Labour Party Rule Book of 1998 Section 6 is headed “Disciplinary Rules” and Rule 6A provides as follows:-

“6A Action by the National Party

6A.1 The NEC shall take such disciplinary measures as it feels necessary to see that all Party members and officers conform to the constitution, rules and standing-orders of the Party; such powers shall include:

(a) In relation to any alleged breach of the constitution, rules or standing-orders of the Party by an individual member or members of the Party, the NEC may, pending the final outcome of any investigation and charges (if any), suspend that individual or individuals from office or representation of the Party notwithstanding the fact that the individual concerned has been or may be eligible to be selected as a candidate in any election or by-election. The General Secretary or other national officer shall investigate and report to the NEC on such investigation. Upon such report being submitted, the NEC may instruct the General Secretary or other national officer to formulate charges against the individual or individuals concerned and present such charges to the National Constitutional Committee for determination with accordance with their rules.”

“A “suspension” of a member whether by the NEC in pursuit of 6A.1 above or by the NEC in imposing a disciplinary penalty, unless otherwise defined by the decision, shall require the membership rights of the individual member concerned to be confined to participation in their own Branch meetings and activities as an ordinary member only and in ballots of all individual members where applicable. A suspended member shall not be eligible to seek any office in the Party, nor shall s/he be eligible for nomination to any panel of prospective candidates nor to represent the Party in any position at any level.”

According to a report by a reliable witness, Mr Ali was trying to win a seat as a Member of European Parliament (MEP). This witness alleges that Mr Ali put forth the names of non-existent persons to become members of the Labour Party in an effort to have his own name appear near the top of the list of preferred Party nominees to the MEP posts.

Rather than face up to the charges against him, Mr Ali then resigned his membership in the Labour Party shortly before the findings of the Labour Party investigation were to be made public, and filed a lawsuit against the Party, alleging discrimination on the basis of race, but he lost and the suit was dismissed.

An 'Independent' Investigator?
Here is an example of Mr Ali's 'fair' treatment of Dr Fredrics:-


Dr Fredrics was accused by Dr Carol Gartrell of having made false allegations of harassment against her.
Is it fair for him to be barred from raising examples of harrassment by Dr Gartrell in order to demonstrate that he was, indeed, harrassed by her?

During the course of Zafar Ali's alleged interviews with complainants, he apparently advised them that their grievance against Dr Fredrics was vague and weak.

But is it really appropriate for a supposedly 'independent' investigator to be giving advice to an employer on how to fix a poorly worded grievance?

If he does this, how can he be said to be acting in a fair, impartial or unbiased manner? 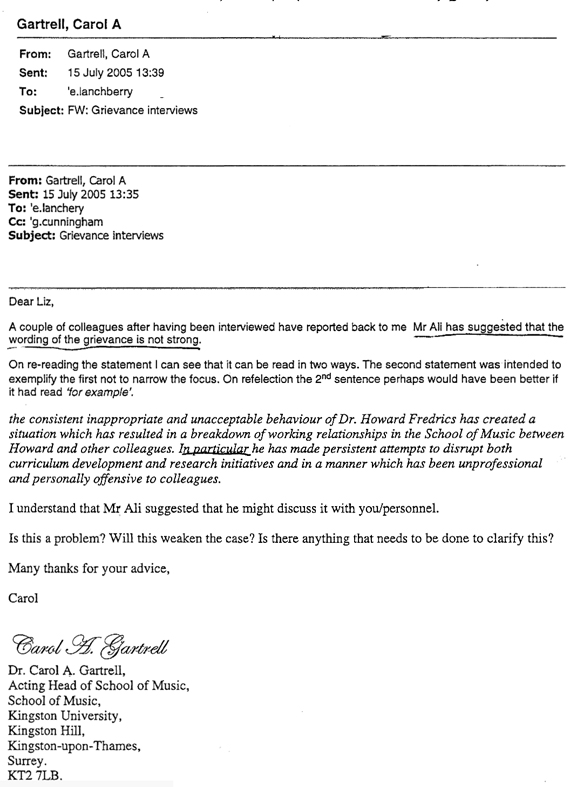 Why did Carol Gartrell write to the Director of Personnel and the Dean to inform them of what Mr Ali had said about the collective grievance?

Was she expecting them to act to somehow 'fix' the weaknesses of the grievance?

Did Mr Ali then go back to Personnel to discuss the weaknesses of the grievance, as he said he might do, and to offer advice on how to acheive their desired outcome of using his investigation to provide cover for the dismissal of Dr Fredrics?

Was this a fair handling of the process?

A Fair and Proper Investigation?

In Whiteside v Camden Council (2003), an employee, Mr Chris Whiteside was sacked following a similar "investigation" by his manager, Mr. Gerry Brett, during the course of which NONE of Mr Whiteside's nominated witnesses were questioned. An Employment Tribunal ruled that this investigation was, therefore, conducted in an entirely flawed manner by Mr Brett and the Council, and awarded a substantial sum to Mr Whiteside as compensation for his Unfair Dismissal.

Stay tuned to learn how an Employment Tribunal will rule in Dr Fredrics' pending case, once it learns more about the way in which Zafar Ali conducted his investigation.

Reliable reports have come from a well-respected British barrister, which suggest that barrister, Zafar Ali was asked to leave his chambers following the discovery that Mr Ali had engaged in reprehensible anti-Semitic acts.

Is this the sort of person that ought to be involved in investigating alleged complaints against a Jewish staff member?
Did the University know about Mr Ali's past record of anti-Semitism activities when they hired him?
If so, why, indeed, DID they hire an anti-Semitic investigator? 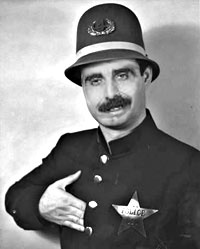 It is widely rumoured that Zafar Ali, who at one point in is career was a member of the Thames Valley Police force, was forced to resign his post in the force when stolen property was found in his police locker.

Further confirmation of this report is pending, however, Mr Ali is invited to write to this site's webmaster to confirm or deny such a report. His response will gladly be posted in unedited form, if he so desires.