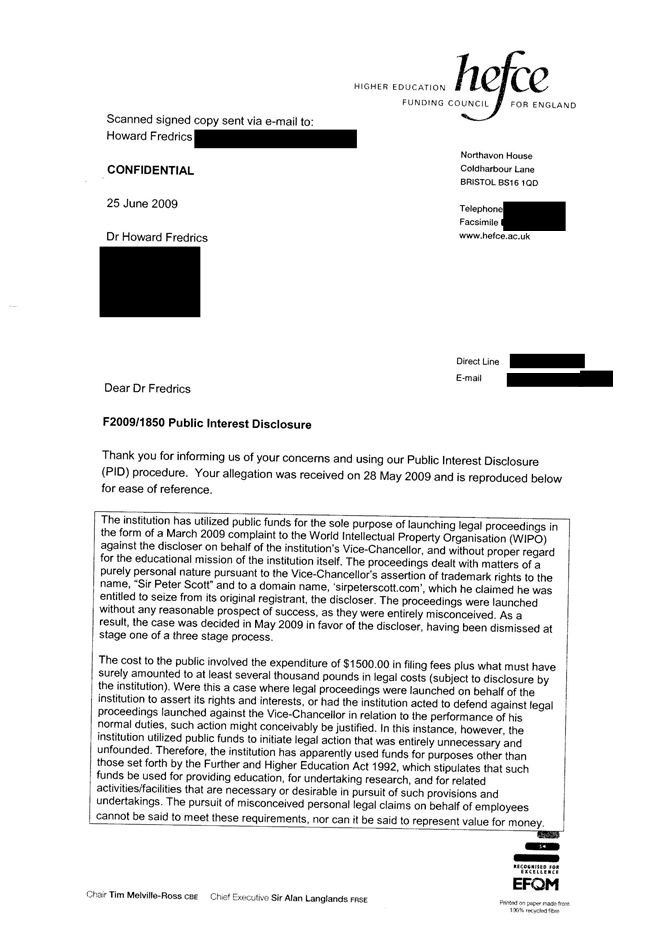 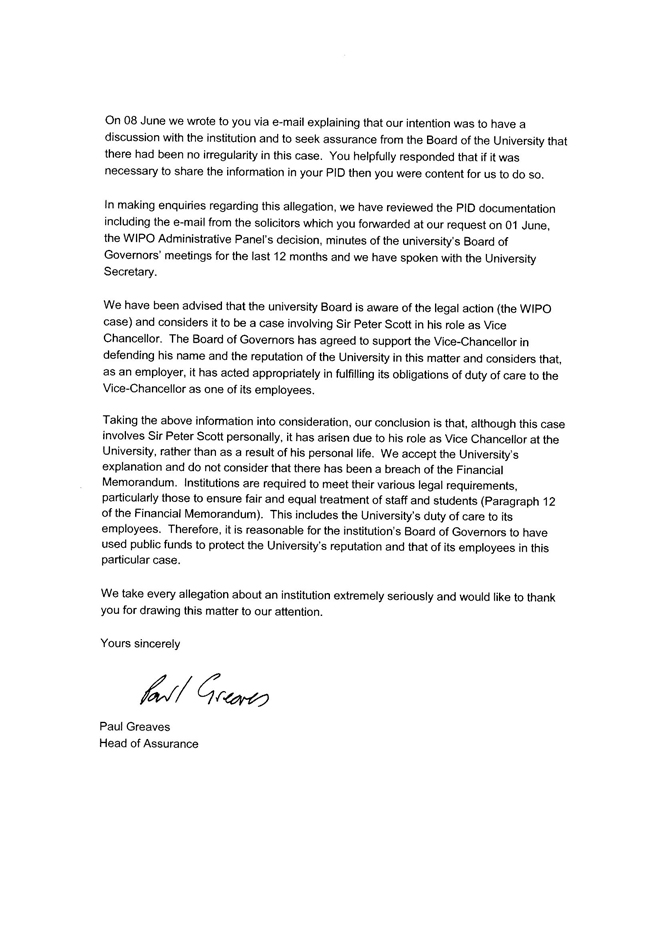 Thank you for your letter of today.

WIPO has concluded its judgment of the case filed by Kingston University on behalf of its Vice-Chancellor, Prof Scott. Their decision is clear that the action was taken by the University on behalf of Prof Scott. The decision is also clear that the University holds no trademark interest in the domain name, sirpeterscott.com. Likewise, their decision establishes that Prof Scott is not entitled to trademark interest in the domain name, sirpeterscott.com.

The outcome of the decision clearly establishes that the University's action was entirely misconceived and had no reasonable prospect of success. Had the University, indeed, been acting legitimately to defend its reputation or the reputation of its Vice-Chancellor, it ought to have launched a defamation claim, which it did not, in fact do. Clearly, it did not launch such a defamation claim because there was no legal basis for them to do so, since the site in question was not and is not defamatory. It contains public documents and other documents written by University staff, which are subject to the Freedom of Information Act and are published in the public interest.

While it is right that a public body may expend public funds to exercise its duty of care to employees, including defending their reputation where it is defamed, this was not, in this instance, the case. The decision handed down by WIPO clearly establishes that the claim was misconceived and was not properly launched for the legitimate purpose of protecting the reputation of Prof Scott or the University.

On the basis of the above information, I would respectfully submit that HEFCE has not acted in accordance with the relevant financial memoranda nor in a manner consistent with the purposes outlined in the relevant Education legislation in failing to uphold my public interest disclosure. I would therefore urge HEFCE to reconsider my public interest disclosure in light of the apparent misconstruing of facts surrounding this case, in particular in relation to the fact that WIPO found that the University was not acting to uphold its reputation, and in light of the fact that the claim was dismissed entirely by WIPO on the basis that Prof Scott does not hold a trademark interest in the domain name in question. The claim was, therefore, a complete and utter waste of public funds designed to harass me and to cover up proven public findings against the University.

Thank you for your consideration.