The following is an email from Carol Gartrell, then Acting Head of the School of Music, to Howard Fredrics sent after colleagues had, at the behest of Dr Gartrell, reported Dr Fredrics' presence on campus while he was 'officially' signed off on stress-related sick leave.

The period of sick leave was necessitated when Dr Fredrics was not given sufficient time to recover from a mismanaged office/studio move, whereby moving staff had, on 10 December 2004, left his office/studio in a state of total disarray and Dr Gartrell had afforded him a total of one day of teaching release to both sort his belongings and to wire a recording studio's worth of electronic musical and computing equipment. The stress of attempting to teach and perform research in an entirely disorganized and unsafe working environment then caused Dr Fredrics to become unable to cope, and he was signed off from work on 14 February 2005.

On 7 March 2005, Approximately three weeks into his five week period of sick leave, Dr Fredrics' GP advised him that if he felt up to it, he should attempt to return to work in any capacity he could, and that if he felt up to attending rehearsals for his opera (not held in his unsafe office/studio environment). After Dr Fredrics attended a rehearsal at the School of Music, he received the following message via email from Dr Gartrell:

Why did Dr Gartrell feel it necessary to ask Dr Fredrics' colleagues to report to her if Dr Fredrics came onto campus while he was signed off on sick leave?

Given that Dr Gartrell was well aware of the importance to Dr Fredrics' professional career of having a successful performance of his opera and of the fact that Dr Fredrics opera was scheduled to be performed within a mere three weeks, on 29 March 2005, and that it could not possibly be performed succesfully without Dr Fredrics' input at rehearsals, why then did she contact Dr Fredrics by email to instruct him to refrain from coming onto campus to attend rehearsals of his opera, rather than contacting him by telephone to discuss the matter directly and to try to work out a viable alternative to holding rehearsals on campus?

Could it be that she knew full well that there was no such thing as a Health & Safety regulation barring attendance on campus while on sick leave, that news of her decision to prevent rehearsals of his opera would greatly upset an already fragile Dr Fredrics, and that she would not be able to justify her order on legitimate grounds if she were asked to do so by Dr Fredrics?

Was her email then merely a deliberate provocation of Dr Fredrics, designed to elicit a strong negative response and/or defiance of her order, whereby she could then use such a response/defiance by Dr Fredrics as grounds to initiate disciplinary action against him?

Just where did Dr Gartrell learn how to use such tactics of extreme provocation, whereby the most sensitive 'buttons' of her bullying target could be identified and pushed?

Given the fact that there was and is no policy preventing staff members from being on campus while signed off on sick leave, what do you think was the reason that Dr Gartrell issued the order to Dr Fredrics to refrain from rehearsing his opera? Should she have been able to anticipate what sort of reaction might result from her order? And what do you think of Dr Gartrell's 'offer' to provide 'support' for his opera AFTER he returned from sick leave (less than a week before the scheduled performance)? Do you think she was acting in a truly supportive manner?

Here is the report of the Kingston University Occupational Health doctor, following Dr Fredrics' attendance at an appointment on 9 March 2005. This report was forwarded to Dr Gartrell and copied into Personnel:- 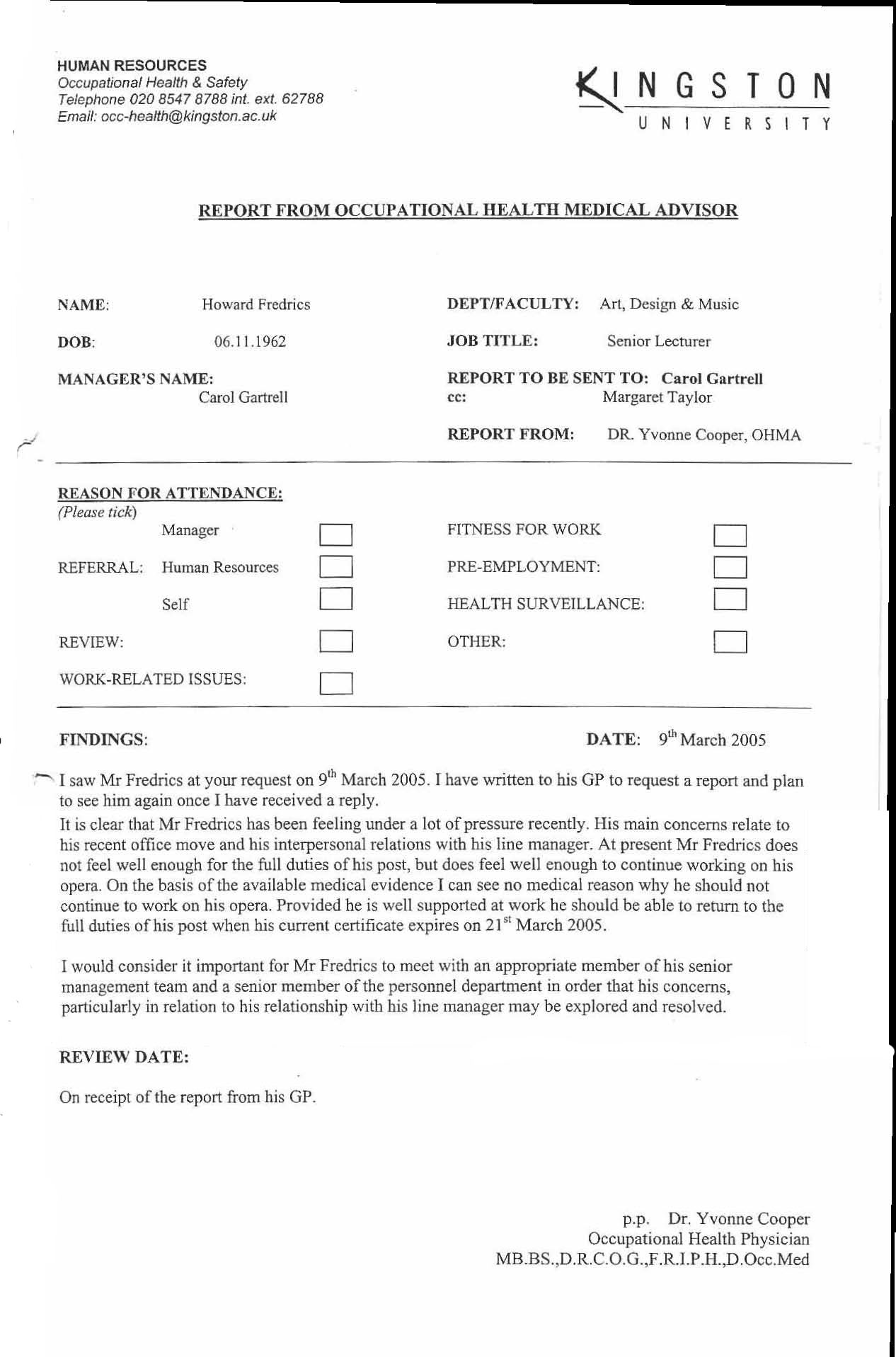 Where in the report does it suggest that there is any Health & Safety regulation or policy that would prevent Dr Fredrics from being on campus to rehearse his opera while he is signed off on sick leave?

Would you not think that, after receiving a report indicating that there is no reason why Dr Fredrics cannot attend rehearsals of his opera on campus while he is signed off on sick leave, that Dr Gartrell would have informed Dr Fredrics' colleagues that he was, indeed, permitted to be on campus, and that she would have henceforth refrained from making further complaints to senior management about Dr Fredrics being on campus to rehearse his opera?

Here's what she wrote to the Dean, Personneland Occupational Health on 17 March 2005:- 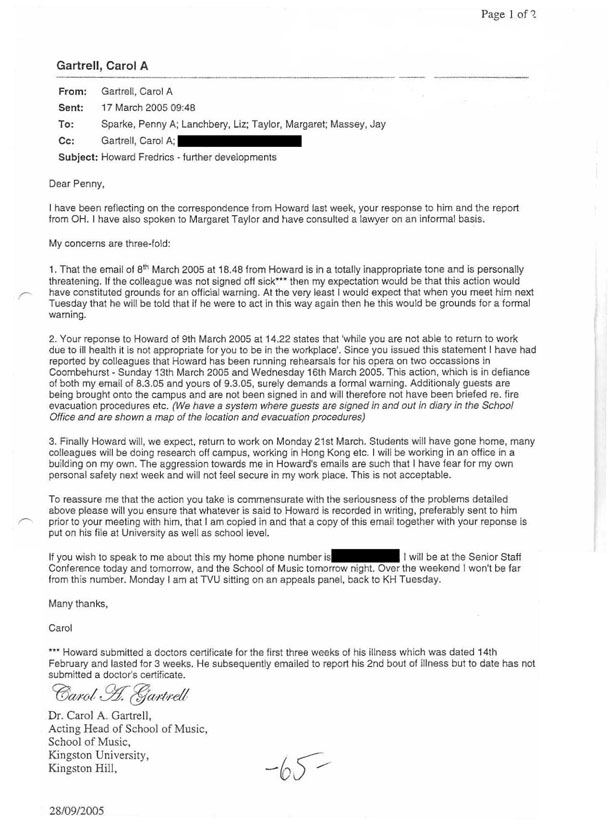 Why is Dr Gartrell so adamant that Dr Fredrics not be permitted to rehearse his opera? What is behind the strong tone of her complaint?
Could it be that she has some personal reasons for wanting to see to it that Dr Fredrics' opera, whose subject matter involves a Jewish historical figure, is not able to be performed successfully?

Just why is it that she claims to feel afraid for her personal safety? Is she prepared to show evidence that Dr Fredrics made threats to cause her bodily harm? Or is she, by attempting to portray Dr Fredrics as somehow prone to violence, simply showing an awareness of the fact that her own insensitive and damaging actions toward Dr Fredrics would be likely to provoke nearly any perfectly rational person into offering a strong response?

THE OFFICIAL UNION RESPONSE TO DR. GARTRELL'S ASSERTIONS
THAT BEING ON CAMPUS WHILE ON SICK LEAVE
VIOLATES HEALTH & SAFETY REGULATIONS

"In order to succeed in a claim under the 1997 [Protection from Harassment] Act, Dr Fredrics must also demonstrate that Kingston is vicariously liable for the acts of its employees on which he relies. In my opinion, he would be able to demonstrate this.

In my opinion, it is arguable that Kingston should have been able to foresee that stress would cause Dr Fredrics personal injury, on the basis that he informed them prior to his employment that he suffered from depression. Further, as from the time of receipt of the document at Tab 2 (the undated note from Wendy in Occupational Health), Kingston were on notice that Dr Fredrics was being caused stress from the working environment."

Health and Safety
at Kingston University

On 9 November 2006, several months after he was dismissed from his post, the University finally permitted Dr Fredrics to enter his former office to retrieve some of his posessions, which were held by the University, and which he needed in order to apply to obtain a new immigration visa, as well as to pursue other professional activities.

When he arrived at his office, a number of large and heavy items, including a pair of loudspeakers, had been placed by a member of staff on an upper shelf. Although the University knew full well that Dr Fredrics was quite weak from his injuries, they nonetheless failed to provide any assistance whatsover to Dr Fredrics in removing his belongings, nor did they even help him to retrieve items from upper shelves, which had been placed there by University staff.

As might be expected, the loudspeakers fell from the upper shelf onto Dr Fredrics' head, and he was unable to support their weight to shield himself from their path, thus resulting in them crashing into his skull. This caused Dr Fredrics to become unconscious and to suffer from a concussion -- a traumatic brain injury:- 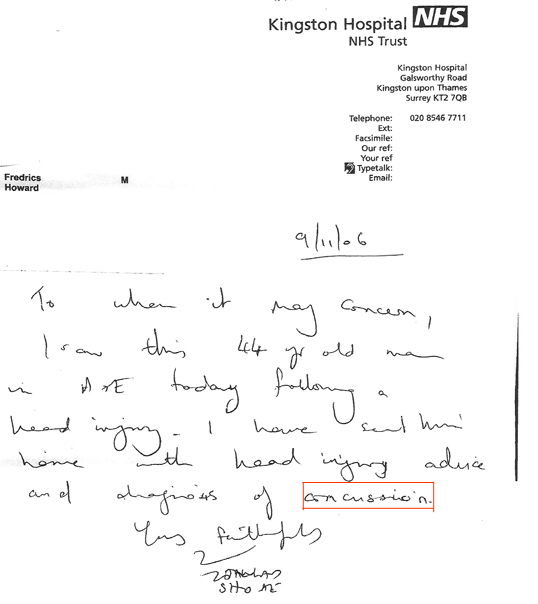 Do you think it was prudent and in the interest of protecting health and safety for the University to have refused to provide assistance to Dr Fredrics, when they knew full well that he was already in extremely poor health, suffering from severe haemorrhagic gastritis, which causes significant loss of blood?

What liability should the University have for causing this injury?

To what extent does Kingston University REALLY care about health and safety issues?

In a July 2009 decision by the Employment Appeals Tribunal (EAT), a solicitor who had been found by a regular Employment Tribunal to have been discriminated against by his employer on the grounds of disability and who had been awarded £453,242 in compensation on the basis of discounted government actuarial tables, found his position vastly improved as a result of the EAT decision.

While the Employment Tribunal had based its calculation on a multiplier of 0.57 of the expected earnings of such an individual, to reflect his poor state of health, the EAT reversed this decison and remitted the case back to the Tribunal with an eye towards awarding total compensation of close to double the original amount awarded.

Let this be a lesson to those employers who might think they could escape by paying out a nominal settlement in such cases. It appears that the courts have concluded otherwise.